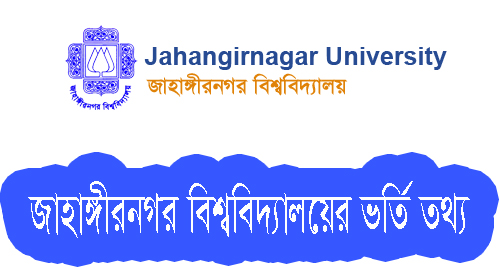 Eligible Students can apply for JU admission through SMS from teletalk mobile. To apply they need to type:

After successful completion of JU admission application student will get return sms to pay application fee.
In reply applicant has to type 2nd SMS : JUYES>PIN NumberContact Number and send to 16222.

The university was established in 1970 by the Jahangirnagar Muslim University Ordinance of the government of Pakistan. Its first Vice-Chancellor, Professor Mafiz Uddin Ahmad (Ph.D in Chemistry, University of Illinois, Chicago) took up office on 24 September 1970. The first group of students, a total of 150, was enrolled in four departments: Economics, Geography, Mathematics and Statistics. Its formal inauguration was delayed until 12 January 1971, when the university was launched by Rear Admiral S. M. Ahsan, the Chancellor.

In 2014, the university had 16,781 students, 755 teachers, and 1,430 other employees. On 2 March 2014, Farzana Islam, a professor of the Anthropology department, was appointed the Vice Chancellor of JU, marking the country’s first female to hold the position.

There are 34 departments under six faculties:

Faculty of Mathematical and Physical Science

Faculty of Arts and Humanities

There are four institutes for specialized research and training: